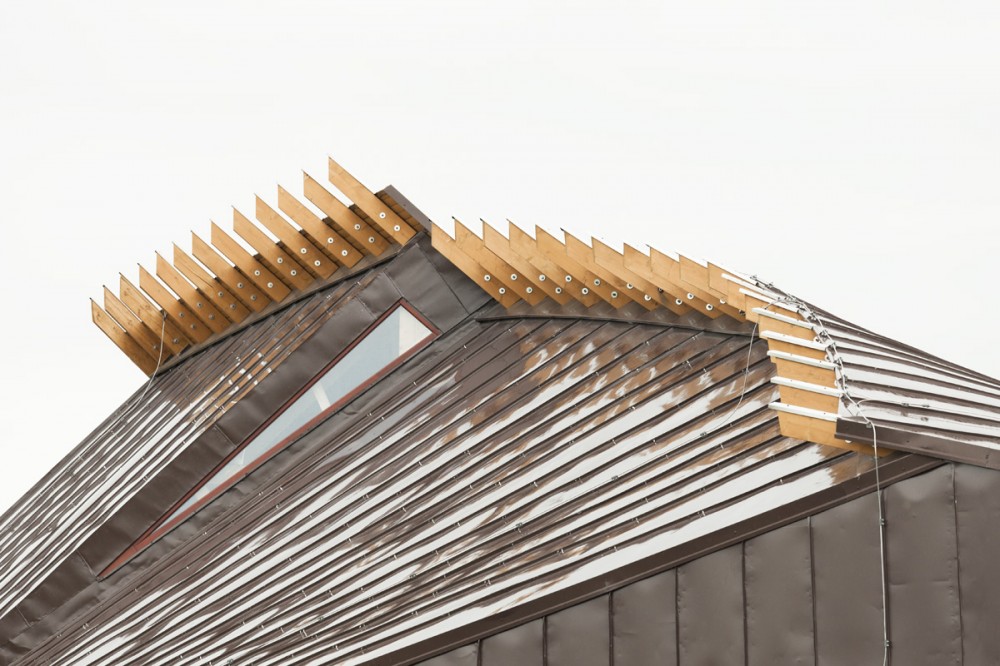 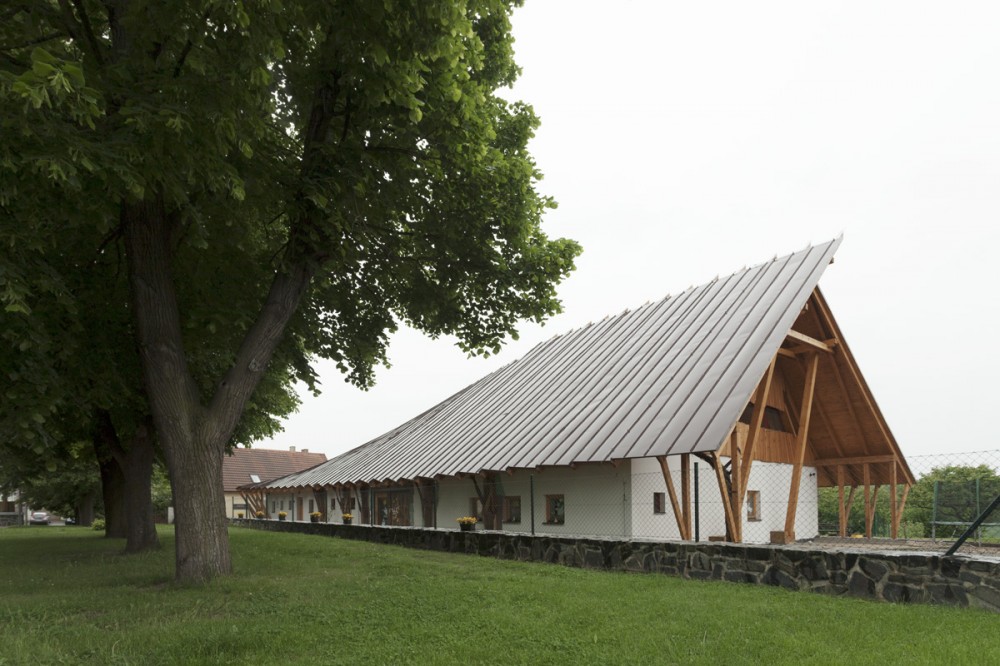 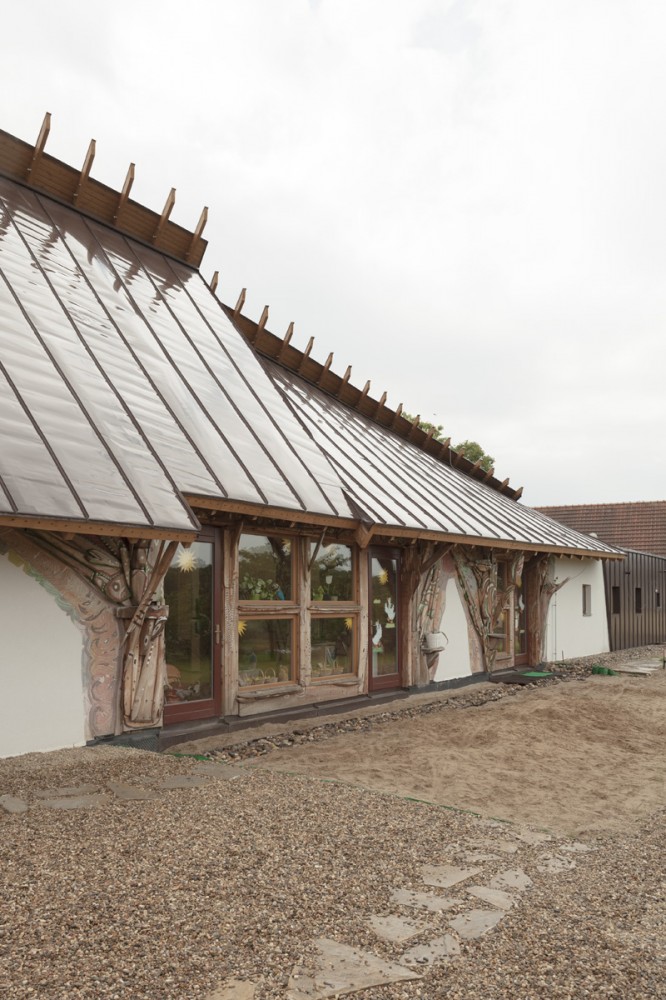 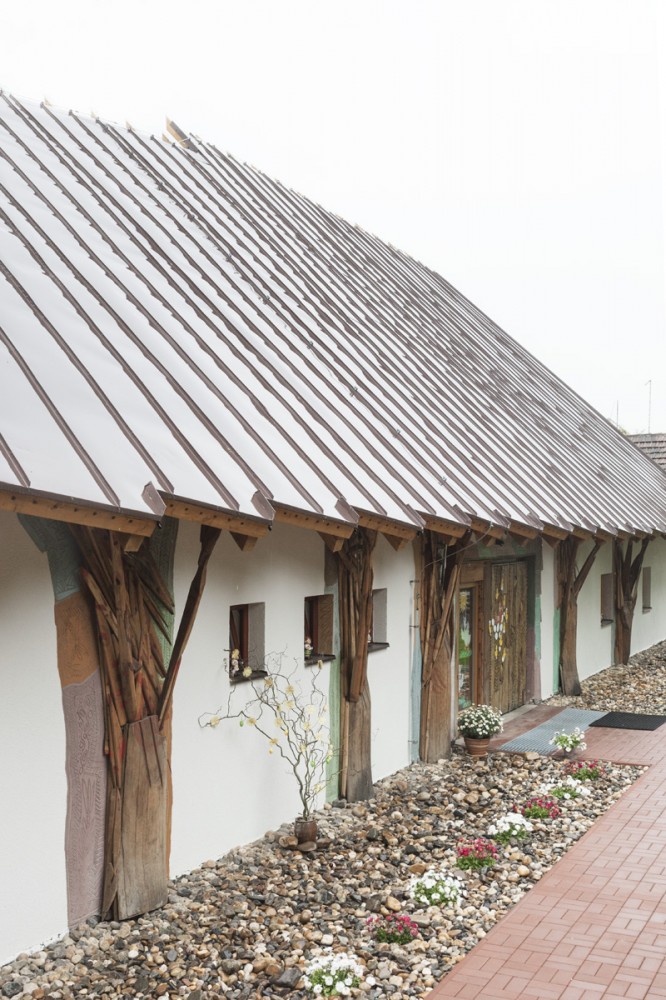 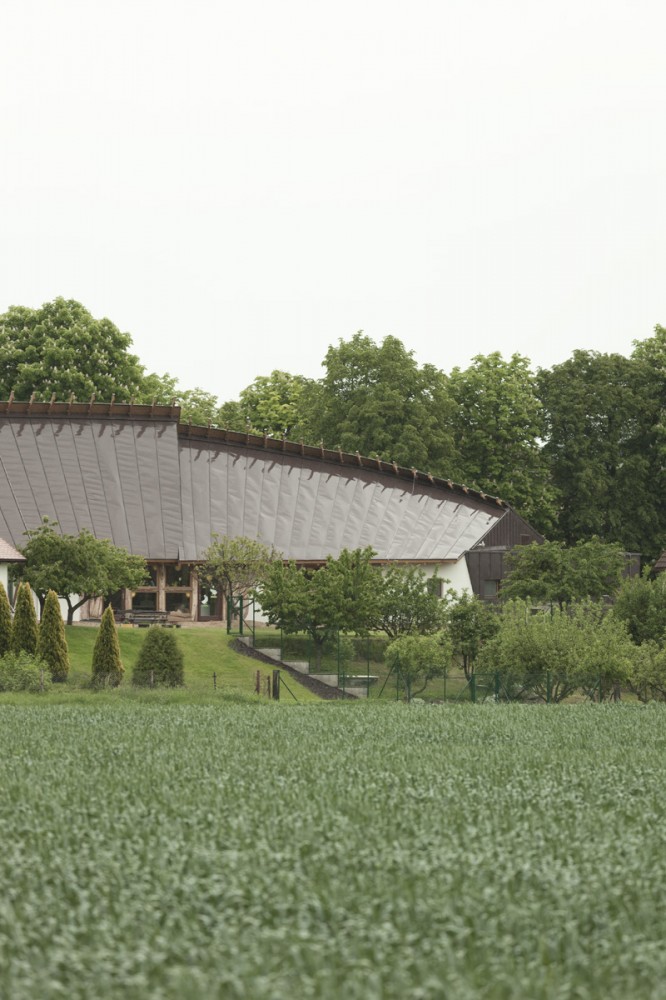 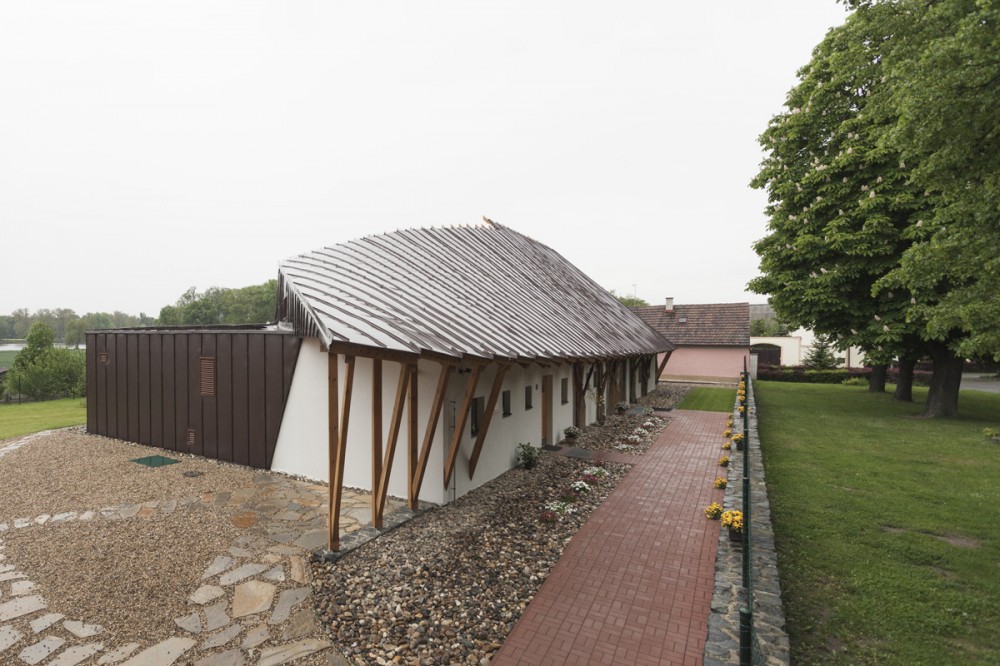 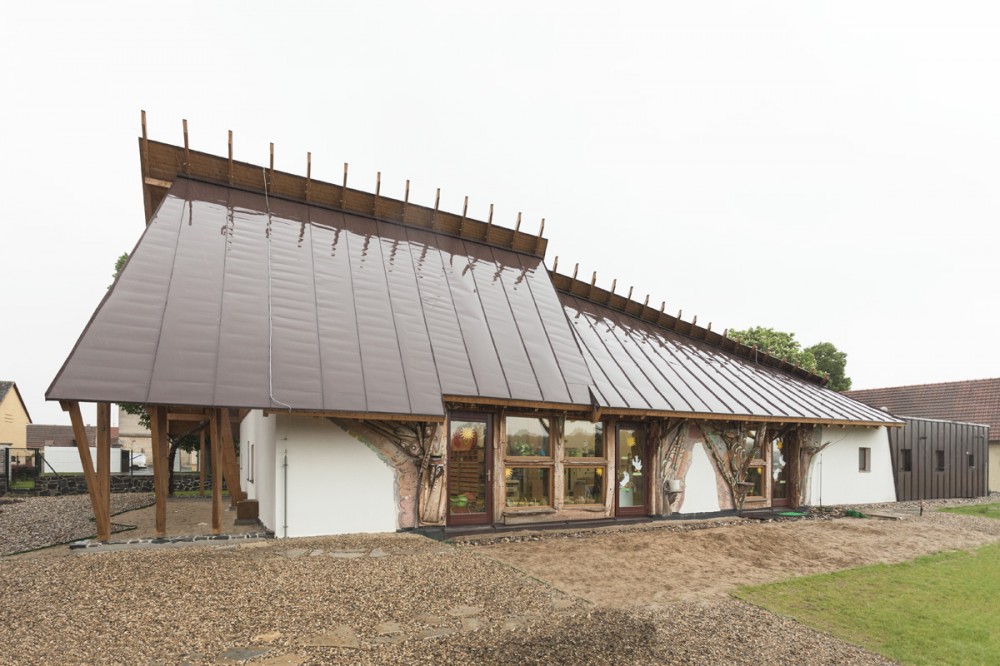 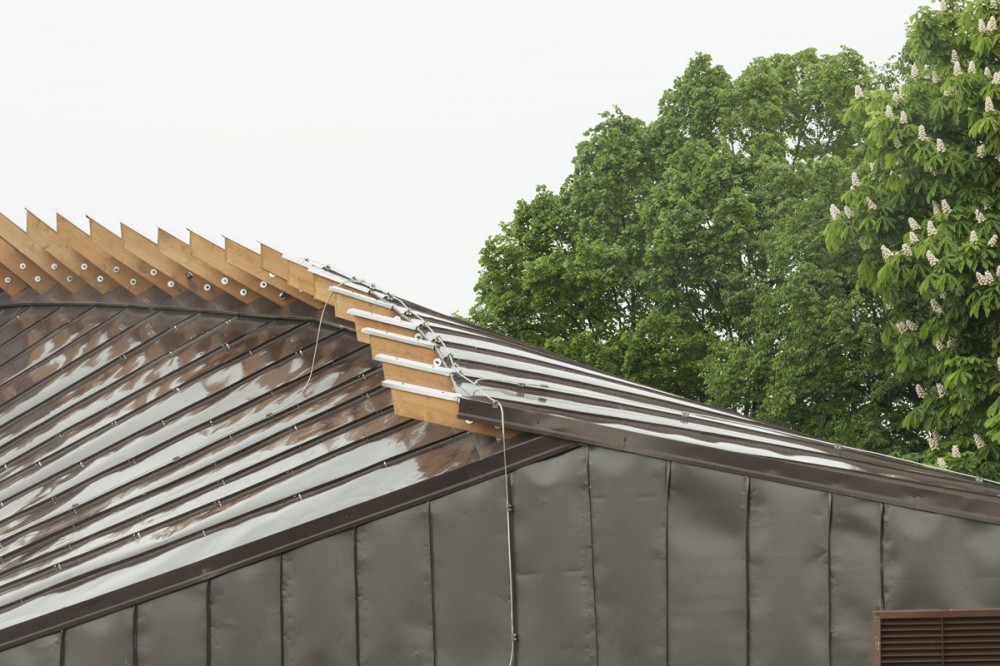 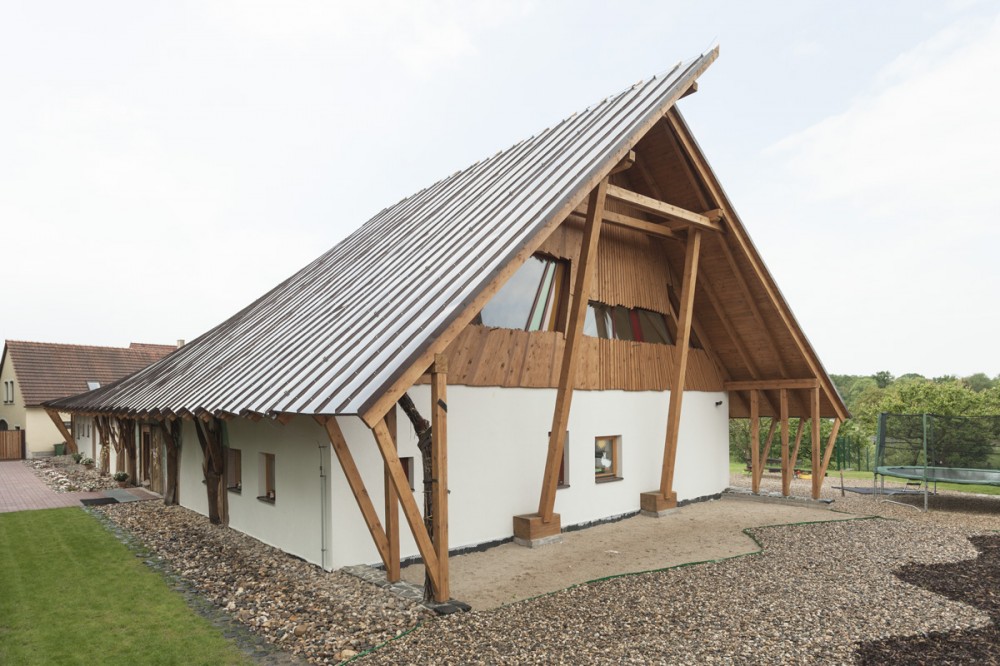 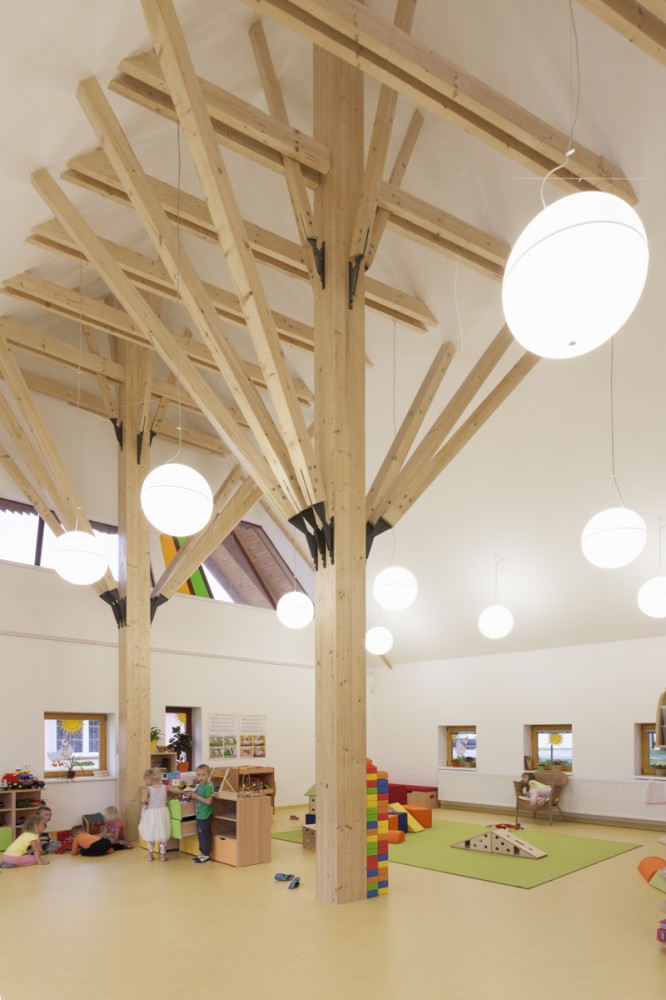 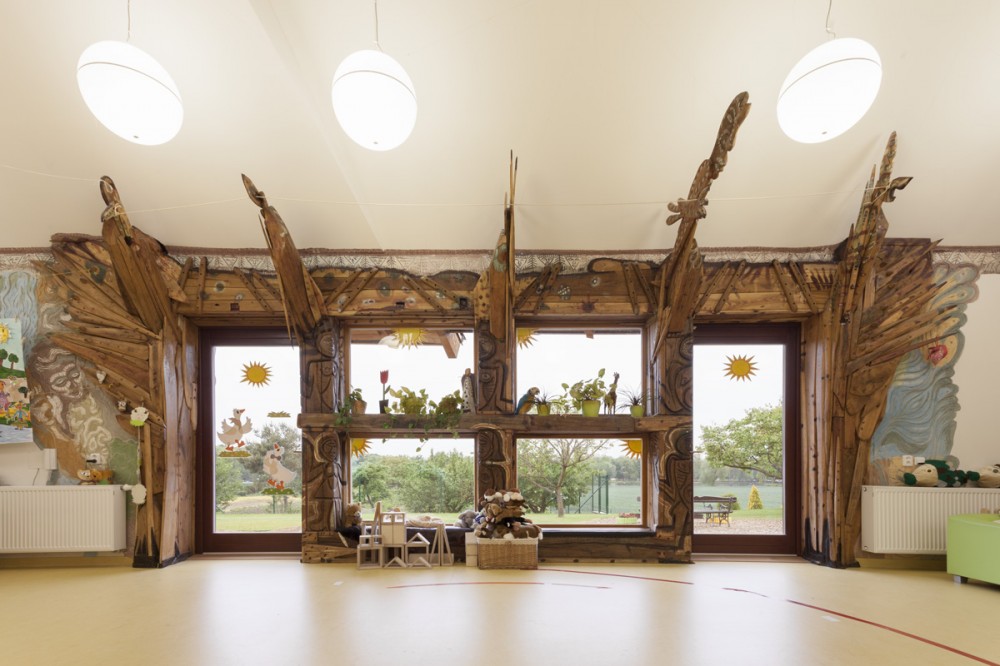 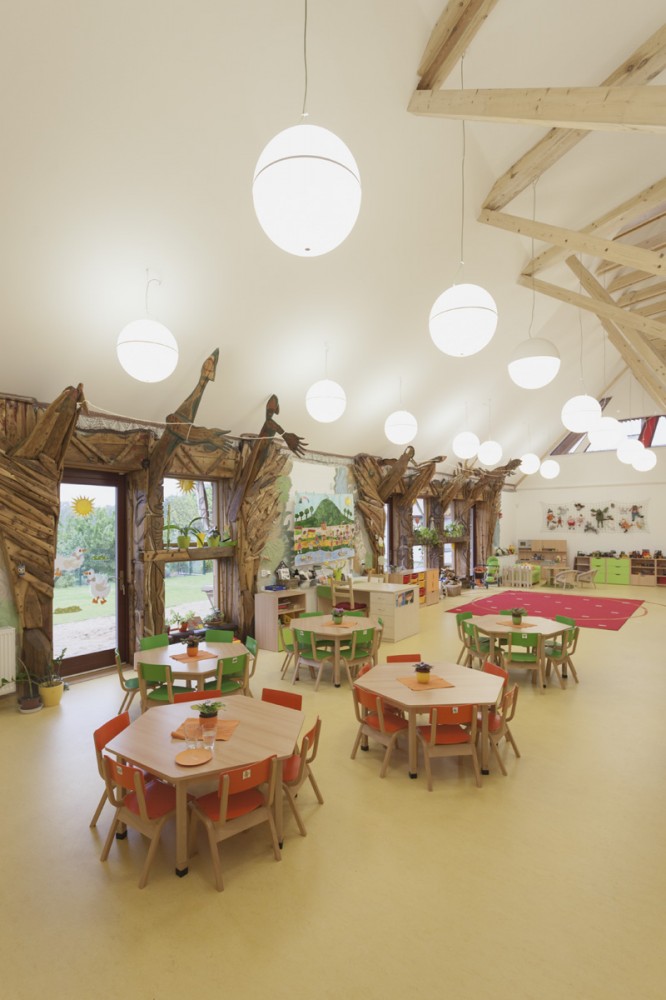 The site the community decided to develop for a kindergarten for 30 children is one of the nicest in the village. It is a vacant lot at the historical village green with a view to the river and a corresponding area for a garden.

The basic vision was to situate the kindergarten in the vicinity, in symbiosis with the country and village. The formal concept was developed complying with the historical concept of vernacular architecture. Colour and material design builds on the local genius loci reflected in the ´earthy´ character of the building. In terms of abstraction, the building is based on the concept of a classic country house with a hip roof. Vernacular elements are also used on the façade that is rich with statuary referring to decorativeness of traditional architecture in the area. The sculptor is Jiri Vorel who has personal bond to this location.

The kindergarten in Dobrin is a return to the world of fairy-tales, to the world of children. It respects their visions and wishes; it should resemble a small ´cottage´ that provides a harmony, warmth, and possibility to have a good romp. The spatial concept of the interior layout works with openness as much as possible and identifies itself as different compared with usually sterile Czech kindergartens. A child can scrawl over a wall and not suffer for doing so. A child becomes the master of the space it may freely transform. No rules exist ordering how the space should be treated, just a framework whose atmosphere the users establish for themselves. The kindergarten will keep on developing and transforming following this concept of understanding.

The kindergarten is surrounded by a garden with fruit trees positioned parallel with the east border of the lot. It is a one-story building of a rectangular footprint. The roof is a distinguished architectural and identifying element. At the north side, it is a classical hip roof with a pitch 35°; towards the south, it slowly pitches down towards one wall. Rafters are timber; the structure reflects the span. Approximately 8 m from the north gable the pitch abruptly changes establishing a clerestory window letting southern daylight in the children’s playroom. Where possible, the interior opens up to the attic below the rafters.  The roof is decked elsewhere in the attic

The building meets conditions for a construction in an inundation area. This concept projects in the technical design and selected materials as well as the interior concept. The building is founded on mass-concrete continuous strips and isolated footings. Vertical outer and internal loadbearing walls are ceramic block to resist potential flooding. Interior non-bearing walls are ceramic brick. Window and door openings in vertical walls are designed to resist flooding or allowing for easy replacement for new ones. Roofing is copper colour aluminium sheet.